All applications should be sent to: aanvraag@abcstichting.nl 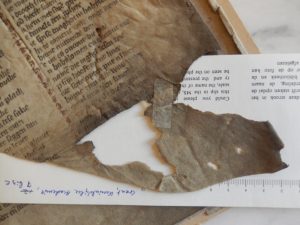 From July 2016 to January 1st, 2020, PhD-student Matanja Hutter (UvA) received a stipendium to study the manuscript tradition of Jacob van Maerlant’s Rhime BIble. Codicological research  of the manuscripts and fragments will enable her to get to know more about the production process, the distribution of labour, the methods of collaboration between various workshops , the intended recipients, and the reception of this early Middle Dutch translation of the Historia Scolastica  in a European context. Promotores: prof.dr. Jos Biemans, and prof.dr. Karina van Dalen, both from the University of Amsterdam. 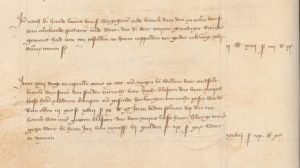 Several years ago, PhD student Anne-Maria J. van Egmond used a one-year grant to write an article about the accounts  of the Court of the Counts of Holland (‘Dair hi goud ende sulver toe dede.’ Haagse hofrekeningen in kunsthistorisch onderzoek, Oud Holland 125 2/3 (2012), pp. 90-101). Thanks to a 4-year stipendium of the University of Amsterdam, she could continue her research. In 2019, this resulted in a PhD dissertation Opgetekend. Materiële representatie aan het Haagse Hof 1345-1425 defended at the University of Amsterdam. Promotores:  prof.dr Dick de Boer and prof.dr C.A. Chavannes-Mazel. ABC sponsored the publication. She is now employed by the Rijksmuseum Amsterdam as member of the Editorial Board of the Journal of the museum.

In September 2017, PhD student Ingmar Reesing received a grant to study and disclose the archives of the Museum for Religious Art, Uden (near Den Bosch). When he was appointed as curator at the Museum Gouda in 2018, the stipendium stopped. 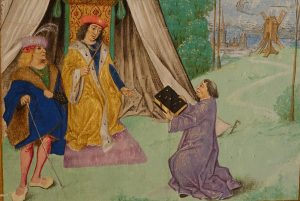 Museum Catharijneconvent Utrecht organised a highly successful exhibition on Flemish Manuscripts in Dutch Collections, Febr 23 – June 3rd 2018. In order to make the public familiar with academic research on medieval manuscripts, Micha Leeflang, curator of Catharijneconvent and Margreet Wolters, Rijksbureau Kunsthistorische Documentatie, were  given the opportunity to 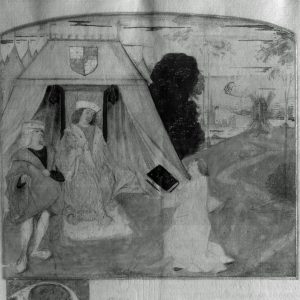 use the Osiris camera of the ABC.  The results were shown, at the exhibition, in a film illustrating the underdrawings of the miniatures in the collection of the Royal Library and Catharijneconvent. Their article (M. Leeflang & M. Wolters, ‘Underdrawing in miniature. Examining Manuscripts from the Southern Netherlands with Infrared Reflectography’) has been published in the catalogue Splendour of The Burgundian Netherlands. Souther Nertherlandish Illuminated Manuscripts in Dutch Collections, Utrecht etc. 2018, pp 20-31.

In 2017, the Radboud University of Nijmegen (prof.dr Johan Oosterman), and dr Eef Overgaauw, Staatliche Bibliothek Berlin, used a € 50.000 fund to continue their project on the books of Mary of Gelre for the years to come (see under Achievements). The exhibition ‘Ik, Maria van Gelre’ opened in Museum Valkhof, Nijmegen, October 13, 2018. For more details see under Circle of American Friends

Stichting ABC co-sponsored the purchase of fifteen medieval written artifacts. The collection entails a variety of fragments from medieval manuscripts ranging from the ninth to the fifteenth centuries, as well as a leaf from an incunable. The collection was previously owned by Johan Peter Gumbert, emeritus professor of paleography at Leiden University, who passed away in 2016. In collaboration with a private donor, Stichting ABC not only ensured the safe-keeping of the collection, but also helped to establish a tool that will be used to educate non-experts about medieval manuscripts.

The collection will be used as the “J.P. Gumbert Demonstration Collection” and in that capacity further the interest in medieval manuscripts among a non-expert audience. The medieval artifacts have already been used at middle and high schools in the city of Leiden (see photo), where workshops on medieval manuscripts have been organized by Prof. dr. F. (Erik) Kwakkel, whose tasks as Scaliger Professor at Leiden University include the promotion of manuscripts.

In 2018, when Erik Kwakkel returned to the University of British Columbia after accepting an appointment at the latter institution’s iSchool (effective 1 August 2018), Leiden University Library and Amsterdam University Library divided the collection of fragments. The collection will continue to be used as a tool to bring original medieval manuscripts closer to the public. 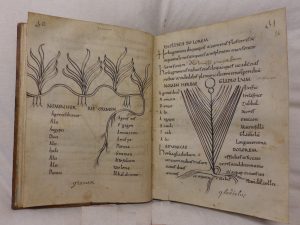 The Museum for Religious Art – renamed the Krona Museum in 2019 – , Uden has been given a subsidiary amount in order to realise an exhibition on medieval manuscripts on plants, May 25 – September 1, 2019.

Fagel Collection Dublin sponsored by ABC Alex Alsemgeest was a fellow at Trinity College Dublin (TCD) from February to April 2019. This fellowship was supported by the Stichting Art, Books & Collections. During his fellowship Alex researched the Fagel Collection, the library of the Fagel family that was acquired by Trinity in 1802. This library holds more than 20.000 books, and several thousands of pamphlets and maps, many of these printed in the Netherlands. The collection was never fully catalogued; the early nineteenth century auction catalogue is still the major tool to research the collection. During his fellowship Alex catalogued about 2.500 titles in the Dutch pre-1800 national bibliography, the Short-Title Catalogue Netherlands and lectured about the possibilities of the STCN for research. Alex’s fellowship was meant as a preparation for a more extended project, a collaboration between TCD and the Koninklijke Bibliotheek, the National Library of the Netherlands to catalogue and digitize the Fagel Collection. TCD and KB have applied for funding for this project and it is expected that the fellowship will help to acquire this. Alex has been successful, both in his research and in promoting the STCN. This is illustrated by the fact that he was invited to present the Fagel Collection to the King and Queen during their State Visit to Ireland (12-14 June 2019). For more information, see his blogs: www.alexalsemgeest.nl

In 2021 Esther Mulders (UvA, Art history) was appointed fellow on behalf of Art, Books and Collections at the department of Book Studies at the University of Amsterdam. Here, she teaches the seminar Manuscripts and Miniatures and several classes on decoration and illustration of medieval manuscripts. The fellowship, which has been extended to 2022, will result in a publication on illustrations of animals in Sextus Placitus’ medical treatise, Liber medicinae ex animalibus in a tenth-century manuscript, Den Haag, Huis van het boek, MMW 10 D 7. 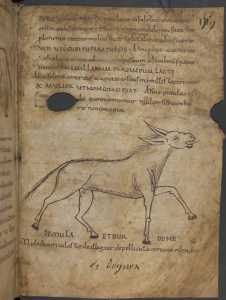 In 2021, PhD student Bram van den Berg (UvA, Huygens ING) received a stipendium for his research project‘Prognostic thinking in the early medieval Latin West. A cultural history of prognostics and prognostication in the writing centres of Fleury, Reims and the Bodensee monasteries’ (2021-2025). His research focusses on the medieval corpus of prognostics within the context of late eighth- to eleventh-century manuscripts from the Latin West. This corpus forms a loose collection of often anonymous texts, concerning predictions based on the careful observation of natural events and cycles
Promotores: prof. dr. Irene van Renswoude (UvA, Huygens) and Dr. Carine van Rhijn (UU)

Suzette van Haaren was granted a stipendium in May, 2020. The title of her thesis is ‘The digital medieval manuscript: approaches to digital codicology’.

On Monday 9 May 2022, Suzette successfully defended her PhD thesis in Groningen, officially rounding off her PhD at the University of Groningen and the University of St Andrews. The contribution by the Stichting Art Books and Collections allowed her to finish up and submit her thesis by the end of 2021. She intends to publish her thesis ‘The digital medieval manuscript’ in the coming year. She describes her works as follows:

‘The overall aim of my PhD project is to explore how digitalisation affects the reproduction, representation and preservation of medieval manuscripts. The dissertation offers a reflection on the way medieval manuscripts function and move as cultural artefacts in an increasingly digital culture, and how this, in turn, is reflected in the objects themselves. New technologies, locations, interpretations and relationships form and reform the object, giving prominence to the dynamic nature of the manuscript’s materiality. Digital reproduction is one of the most impactful events in a manuscript’s life, because it offers the codex completely new possibilities: think of the digital as a democratising platform, how networks form online, and how images are scattered over the Internet. To fully understand how we perceive the manuscript as modern cultural artefact we must look its whole life: how it has been handed down to us and how this affects its materiality, from the middle ages until now. I propose the following question: How does the dynamic material process of digitisation — the translation from book-object to digital object, and their interrelationship — affect the way we perceive, interpret, reproduce, preserve and use these manuscripts as cultural objects?’ 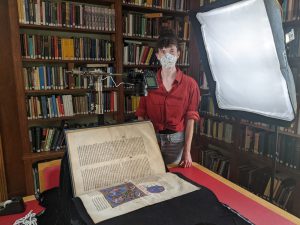