U.S.-based donors can support our activities in a tax-efficient way through a contribution to the American Friends of ABC at the King Baudouin Foundation United States (KBFUS). Because KBFUS is a public charity, donors may claim the maximum tax benefits allowed by U.S. tax law for their contributions.

If you wish to support us, here is how to proceed:

Write your check to KBFUS, write “ABC Foundation” in the memo section of the check, and send it to KBFUS, 10 Rockefeller Plaza, 16th Floor, New York, NY 10020.

Gifts by wire transfer or to contribute other types of property:

For any additional questions please do not hesitate to contact the chair of the ABC Foundation at abcstichting@gmail.com

For an overview of the activities of ABC, please take a look under ‘Resultaten – Achievements.’ An English version is in preparation.
This is one of the new projects the ABC is supporting  since 2016:

The Prayer book of Mary of Guelders. An international project around a magnificent manuscript. 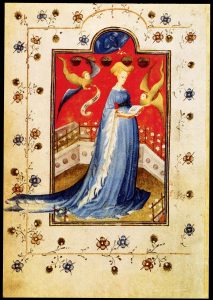 Because of its fragile state, the Prayer book of Mary of Guelders in the State Library in Berlin has not been accessible for years. Now, in a unique collaboration between the Berlin State Library and Radboud University in Nijmegen, a research team has been formed, consisting of experts in the fields of medieval book illumination, text and devotion, book restoration and technical research. They will combine their knowledge and expertise by dealing with a large variety of questions. The chief aim is to restore the manuscript in a condition that will not only allow the expert to study the manuscript, but also will permit the book to be displayed to the public.

An important part of the research focuses on the material aspects of the book: studying the pigments, parchment and ink. Three researchers of the Rathgen Forschungslabor in Berlin are conducting research with Raman Spectroscopy and infrared reflectography. In the State Library itself, where the book is being kept, two restorers are providing a detailed description of the condition of the book. As Mary of Guelders’ book of prayers has been used quite intensively, the damage is extensive: the paint of some of the miniature illustrations has faded or disappeared altogether, and many pages have been torn. These vertical tears sometimes stretch across the entire length of the page, which has led to parts of the parchment becoming loose. If nothing will be done, it is not unthinkable that entire pages will eventually break down completely.

The contents of the manuscript will be examined closely, too. For instance, prof. dr. Johan Oosterman from the Nijmegen University will question why the Duchess Mary of Guelders chose certain prayers and devotional texts. New archival research will hopefully shine more light on Mary’s life in Guelders, while continuing her ties to the French court. Art historian Dr. Miranda Bloem is scrutinizing which illuminators where actively involved in the painting process and how they distributed their labour. She also conducts iconographic research to some of the rather obscure saints in the prayer book

In the meantime, preparations are made to exhibit the book at Museum Het Valkhof Nijmegen, in October 2018. This exhibition will not just focus on the book but also on how the research was conducted. For this reason, Dick van Aalst, photographer and filmmaker, is tasked with capturing the project on film (the first results of his work can be viewed in a recently published video). During the years leading on to the exhibition, the general public and other researchers will be able to follow closely the investigation and learn about the dilemmas the researchers have been facing, about their accomplishments but also about the points where they got stuck. The aim is to be as transparent about the research project as possible, to be open in our communication and show how academic research is conducted.